When I blogged about “Mu” three weeks ago, the bright sparks amongst you must surely have expected a follow-up.   (The clue was in the title:  “Part 1”!)   So here’s the sequel, this time discussing Edward de Bono’s wonderful word, “Po”.
In some respects, it’s actually a little like “Mu”.  Both words are hedging their bets in my preferred netherworld between “Yes” and “No”.
Actually de Bono was trying far too hard here, positioning the word variously in his 40+ books as shorthand for almost anything, but certainly for “Provocative Operation”, “Provoke”, “Prod”, “Poke” or “Position”.   No-one needs to be so thorough or exacting, and I’d have been just as happy with “Yip”, “Clo” or “Sab” myself – but then I’m not the best-selling author.   (If only you’d each agree pay 99p a month for this blog on your Kindles!)
Curiously, the way he encourages us to use “Po” makes it feel more like punctuation!  It announces a provocative suggestion, but isn’t actually part of that suggestion.  For example:
It’s this final example of which de Bono seems most proud.  He tells his readers that it was this particular “po” which resulted in a change of best practice, such that most water inlets are now downstream from the outlets.

Based on the examples above, the level-headed reader might already have deserted this blog post, opting for a nice cup of tea in preference to a plate of tripe.  But fear not, I’m coming to the point … by degrees …

The really important thing about these “pos” is that they’re highly effective in their job of provocation.  If the audience is prepared to tolerate creative thinking techniques (often the biggest challenge) then they successfully divert the thinker onto new tracks.   No-one’s suggesting that wheels should actually be square, it’s just that in pursuing that train of thought we might arrive somewhere new.  And it might even be sensible and valuable too!   That’s what EdB is getting at when he observes that you sometimes don’t know why you’re saying something until after you’ve said it.

Some here are some suggestions to help you formulate “pos”.  The more you practice, the better equipped you’ll be, because it’s often useful to be able to launch “pos” with little or no notice:

Better still, here’s my challenge to the web development community:  Why can’t I just visit “www.pos-r-us.com”, type in my one-line problem statement, and expect a “po” at the click of a mouse?
Posted by Jeremy Worrell at 7:57 pm 1 comment:

We could all manage to learn something from the victorian artist John Atkinson Grimshaw.

Although not the most famous painter in today's contemporary galleries, he's still immensely popular, and there are both artistic and non-artistic reasons for that.

Perhaps surprisingly, it's not the content of his artwork which I find the most creative:  Far more inspiring for me are his techniques and styles, and far more interesting are the reasons why he adopted them:

It was not well known in his day that in fact he was heavily indebted, and his prolific output was due to force of circumstance more than addictive habit.  Jane Sellars, curator of the Mercer gallery in Harrogate, said in a recent edition of the Guradian newspaper that "He painted to pay bills, painted keep his family together, and painted in lieu of rent on his palatial homes."

His parents tried to stymie his career as an artist, even resorting to throwing-away his materials.

It's often said that most of our best inventions come in times of war.  The list ranges from the sublime to the ridiculous, including radar, synthetic rubber, the jet engine, and even tampons and the "Slinky"!

It seems that adversity drove Grimshaw to innovate too.  To keep afloat financially, he invented an exceptionally quick-drying varnish, learnt to create powerful effects with the minimum amount of paint, and often resorted to painting rainy streets for which a smaller palette would be needed.

This is all very interesting, because we're often told by the experts that workers reach ideas much more effectively when they're given the time, space and resources to play around.

But perhaps we also need a problem to focus on.  And if our problems are insufficient time, space and resources, all may not be lost for the creative thinker.

So perhaps it's back to my favourite theme of variety:  Sometimes we need too much, and sometimes too little.  The important thing is to move the chairs around, ring the changes, fire the synapses ... then harvest the ideas.
Posted by Jeremy Worrell at 8:42 pm No comments: 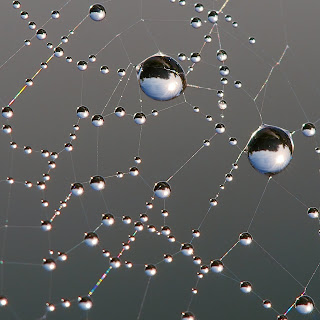 I have lots of very poor ties, despite weeding them out periodically.  But enough about my sartorial demons.  That's not this week's topic.
Instead I'd like to talk about "weak ties", AKA loose connections.  It's long been theorised that  they're the key to unlocking meaningful new ideas.   Let me explain ...
To arrive at a new business idea, you need to link two previously disconnected concepts, or at least link them in a new way.
But if they're too closely aligned already, someone will already have beat you to it.  The new product will already be en route to your market.
Correspondingly, if the two concepts are too far apart then your seemingly wacky idea might actually be just wacky.   Nothing more.
The trick then, is to strike the middle-ground:  to juxtapose two or more seemingly dissimilar ideas, concepts or objects, and then juggle them around until a meaningful innovation begins to emerge.
I'm absolutely sold on this, having tried it several times to good effect.
That's why I was so interested to read about Semantic Clustering in the March 2011 edition of Harvard Business Review (yes, I'm still 2 months behind in my reading!)  This technique analyses textual documents from various sources, and looks for connections based on the frequency of predefined keywords.
In the example given in HBR, texts from several thousand companies were run through the engine from software specialist "Quid", and the outcome was a stunning visualisation which was more than a little suggestive about where weak ties might occur.
You can read more about this at the following links.  If you have time to experiment, I'd be delighted to hear your results.
http://www.telegraph.co.uk/finance/yourbusiness/8304525/Technology-entrepreneurs-are-driving-UK-towards-recovery.html
http://hbr.org/2011/03/vision-statement-locating-your-next-strategic-opportunity/ar/1
Posted by Jeremy Worrell at 6:57 pm 1 comment:

Bafflement might be our western response if I answered your questions with "mu", instead of the more traditional "yes" or "no".  But in the far east this kind of thing is still well-understood, and fairly common practice.
Despite working for a Japanese company, I first came across "mu" in the modern classic Zen and the Art of Motorcycle Maintenance, by Robert Pirsig (a bizarre book, but full of inspiration).
Loosely speaking, "mu" means "nothing", or "neither yes nor no", and I think of it as a way of suspending judgement.  It's great to have a word for this, because it legitimises the pause-for-thought and helps us resist pressure to judge prematurely.
"Mu" has another use in creativity too:  It encourages the search for alternatives, by tossing back closed questions.   If we're 10 minutes into an idea-generation exercise when someone asks "Shall we go for idea A rather than idea B?" then the correct answer should be "mu".   The time for that decision comes later when options C to Z have revealed themselves, and when the pros and cons have become clearer.
What a wonderful word then to complement the creative phases of innovation, where it's necessary to suspend judgement and also seek out new approaches, in order to fuel our ambitions.
If only it were easier to throw new words into conversations casually.  Unfortunately people tend to be wedded to their own adopted jargons, so unless you're in a creative industry you might struggle to garner support for "mu".  Better perhaps to hold the concept dear, and remember that "I don't know (yet)" is often the most helpful answer.
Posted by Jeremy Worrell at 12:07 am No comments: